One thousand Easter eggs, and other responses to the Covid-19 Outbreak 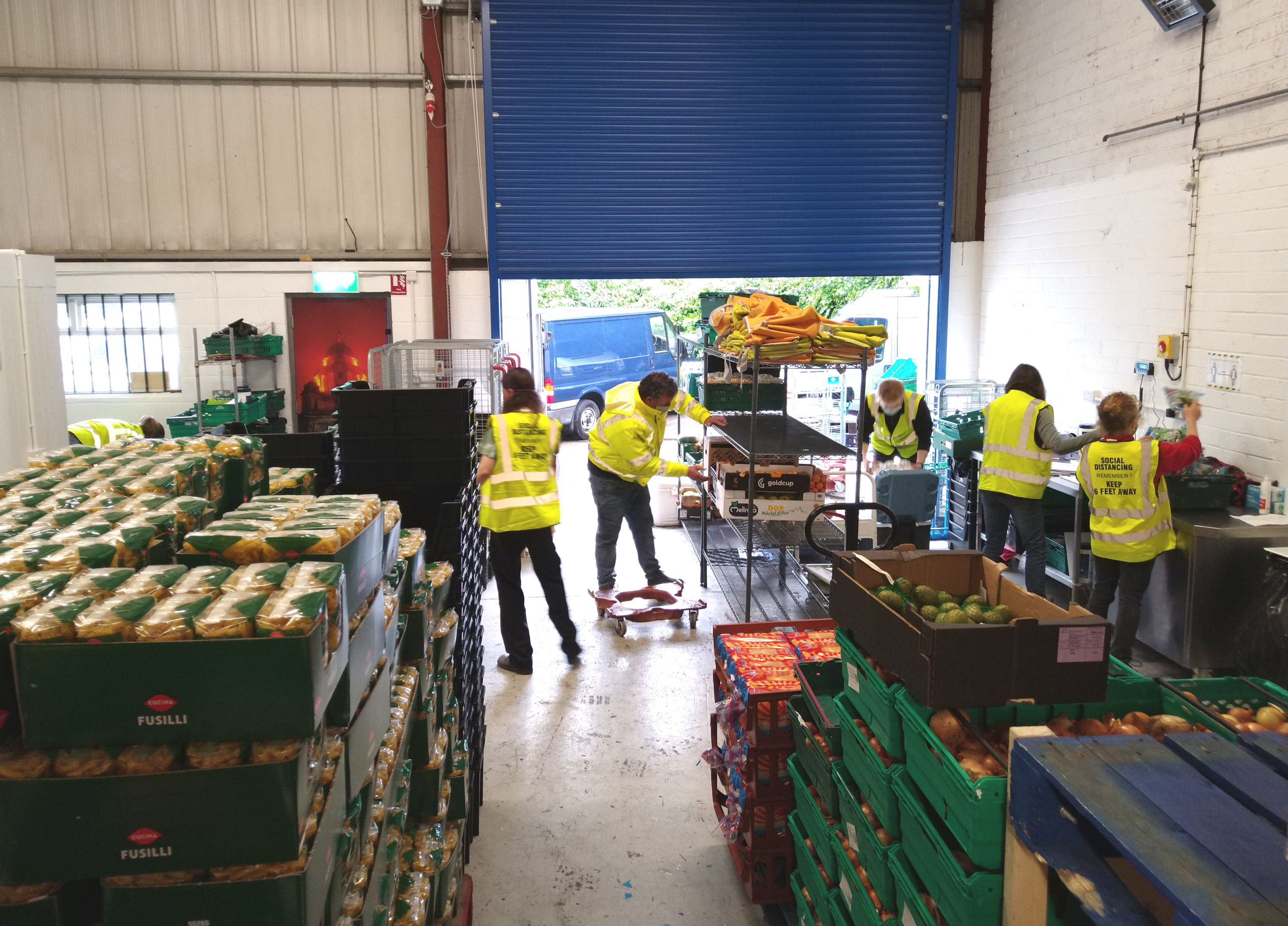 Eggcup was set up to provide surplus food to food clubs in Lancaster and Morecambe. But from the beginning, the aim was to be flexible, to allow it to do whatever was needed. This flexibility has been tested in the Covid-19 outbreak, when food clubs stopped having social meetings, restaurants shut down, and supermarkets were besieged with panic buying, so that for some items they had empty shelves, rather than the usual surplus. I talked to Project Manager David France to catch up with what Eggcup has been doing so far during the crisis.

Food clubs are meant to be social occasions; neighbours come together for a cup of tea and biscuit, with kids running around, and members choosing from the food piled on tables. But once the risk of Covid-19 became evident, such gatherings were not allowed. At first members queued outdoors at collection points, keeping a safe distance from each other, to pick up pre-packed bags of food.  As the virus spread, even that seemed risky – for volunteers as well as members. Some food clubs switched to home delivery and others temporarily stepped back from operating and enabled Eggcup to provide a home delivery service on their ‘patch’.  And Eggcup recruited new members, sometimes signposted by DWP job coaches, as people’s income crashed or they lost their jobs.  We developed a new register of members, and people could apply to join by telephone or online.  Our aim was to focus on the people in most need.

And what about the supply? At least at first, the crisis led to unpredictable gluts of perishable surplus food, as restaurants, pubs, and catering services closed down. Eggcup took donations from Lancaster University, as it closed most of its food service businesses, from restaurants such as Fenwick’s in Claughton, Greaves Park, Pizza Hut, Bella Italia, pubs such as the Brown Cow in Lancaster, and from Lancaster City Council’s cafes. (Thanks!). We were also grateful for some longer-life food donations organised through local schools. The depot was overwhelmed with food, and everything had to get out to someone who could use it before it went off. There was a huge supply of all the eggs that would have gone to restaurants and hotels for breakfasts – but eggs come in catering packs of thirty dozen, rather more than even the most enthusiastic omelette-maker could use and suddenly there was a shortage of consumer egg boxes, as every producer tried to get hold of them. Fortunately helpful people donated egg boxes so that the huge boxes could be divided into half-dozens and given out.  We struggled at first in the depot, creating new protocols as we went along and with few volunteers in place.  There was a huge learning curve; undoubtedly we made some errors, but we’ve listened to feedback, reviewed and improved all the time, alongside the marvellous new volunteers who came on board. 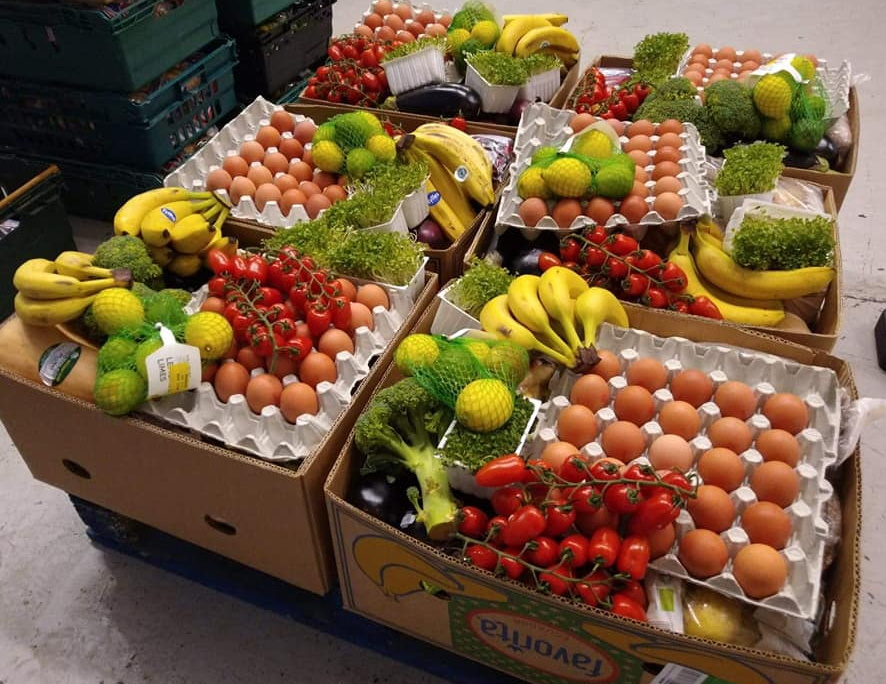 As the surplus glut died down, we recognised that the supply of surplus was perhaps more erratic than usual and that we needed to supplement the surplus for people who were relying on these food deliveries.  We worked with food clubs and the Olive Branch in order to initiate a Buying Cooperative scheme.  Through the Buying Cooperative, we could buy staples in bulk at discount prices to ensure that some essentials were always provided to members.  We secured funding to cover the cost of the Buying Cooperative for the crisis phase (and this is something that we hope members will buy into post-crisis).

As Easter approached, another kind of egg became available. The folks at The Bread and Butter Thing asked David if Eggcup could use large chocolate eggs in boxes. But chocolate eggs come by the truckload: that is, 50,000 eggs. (You may think you and your friends could eat that much chocolate, but you couldn’t). David ordered a load, and some went to the Lancashire Resilience Forum, leaving just 1,000 eggs to brighten up the boxes going to food clubs and food banks. 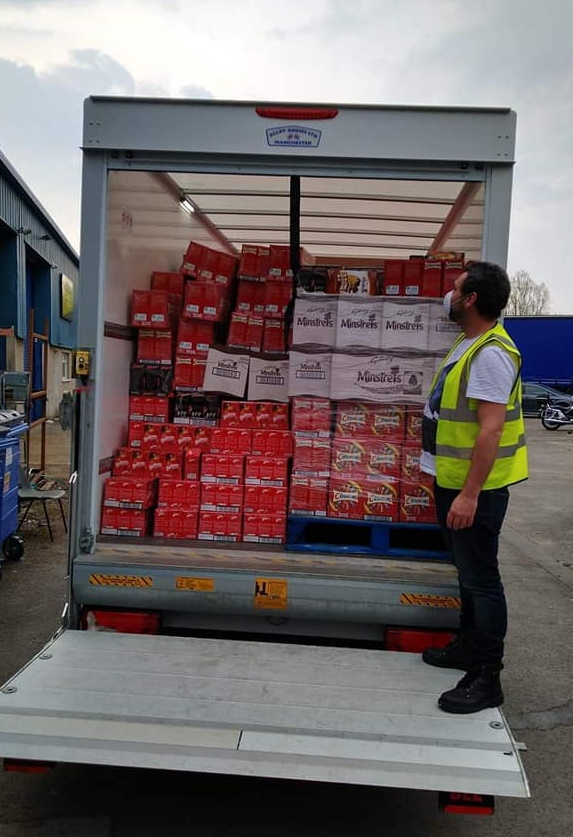 A big change in Eggcup’s operations has been its participation in a new project, working alongside Age UK Lancashire.  This project was initially funded by the newly formed Morecambe Bay Foundation and then by Lancaster City Council, to deliver meals to those who are ‘extremely vulnerable’ in the Covid-19 outbreak due to pre-existing conditions.  Eggcup collects surplus food, but also buys food to fill any gaps. The ingredients are then made into meals by the Hospitality and Catering Department of Lancaster & Morecambe College, and by Chef’s Catering Northwest, based at the Heysham Golf Club. The meals are packed, labelled and frozen and Eggcup volunteers deliver a weekly supply to people who need them, alongside a shopping bag of essentials like milk, tea, coffee, and the makings of toast or sandwiches.

All this takes many more volunteers than Eggcup has had before. Our colleagues at Lancaster City Council organised the recruitment of new members and behind-the-scenes administration, and CVS sent volunteers so that within a week or two we had about ten people helping unload, sort, pack, load, and drive.  Over the weeks, we have recruited more volunteers as some have gone back to work and the need for food deliveries grows.  We now have about 40 volunteers giving their time, and we could achieve nothing without them.  Staff from the City Council, Julie Whincap, Debbie Croskery, Megan Walder , and Amanda Gervais helped with our growing load of admin, and Scott Prouse and Gareth Walmsley helped with the driving and deliveries.  This is just the beginning of what is likely to be a long crisis, with changing food resources and changing needs, but it has shown that the organisation can learn new ways, quickly, can built fruitful alliances across the district so we all pull together in a crisis. Congratulations all around, to donors of food, the Council staff, the amazing volunteers, and David, Phil, Jay and Deborah.