Around one third of all food produced globally currently goes to waste, contributing around 8-10% of the total man-made greenhouse gas emissions. This is a huge waste of energy and other resources like water, land and nutrients required to produce the food in the first place. As part of #FoodWasteActionWeek 2022 Eggcup have been highlighting different ways to reduce waste in our homes, but most of our work focuses on reducing the large amounts of edible food going to waste across the wider food supply chains, from our local restaurants and shops to on-farm itself. 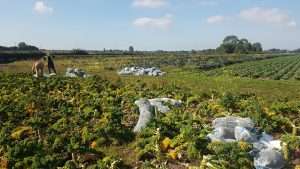 Why do we have so much food waste? Food waste is built into the business models of many large food producers and supermarkets. The way our current food system works relies on over-production and over-buying by big business to ensure that there is always a wide range of produce available for consumers. Many food businesses rely on long and complex supply chains, which can be impacted by poor weather, labour shortages and unexpected shocks (such as pandemics and wars). Smaller businesses are likely to have substantially less food waste as they cannot afford to waste food in the way that large businesses like supermarkets can.  However, waste still occurs due to unexpected events and the unpredictable nature of industry.

Producing food to meet supermarket contracts can be a risky business for famers and there have been countless examples of piles of edible food left on farm if they do not meet the quality standards set out by supermarkets- many of which are based on size and appearance of a fruit or vegetable rather than nutritional value. Farmers can also end up with excess crops on their hands due to inaccurate forecasting by retailers or due to unpredictable weather conditions. It has been found that farmers waste around 16% of their crop before it even leaves the field or barn. This often has to be ploughed back in as producers cannot afford to harvest and manage the logistics needed to get the food to market, or to other means of distribution.

It’s a big problem…what can we do about it? Sometimes the scale of the problem can be daunting but humans have designed the systems that are currently creating so much waste and that means we can design them differently. As part of the FoodFutures partnership Eggcup is working with other organisations to support work to reimagine how local food distribution could work differently, as well as campaigning nationally to create more pathways by which food can be rescued from going to waste. As part of this work we’re really excited to announce that we are a partner on a new FoodFutures project ‘Closing Loops’ which is funded by the National Lottery Climate Action Fund. This five-year project is designed to support local communities, businesses and organisations in North Lancashire in taking action to reduce food waste and transform our local food economy to one that is circular, zero waste and better for people and the environment (LINK).

As part of the Closing Loops project we’ll be taking forwards work to develop a locally adapted Gleaning Network and we’re pleased to announce that Jay (currently our fantastic Morecambe Hub manager) will be moving to a new role as the Closing Loops Gleaning Coordinator.

But hang on a minute…what actually is gleaning and what does it have to do with food waste? 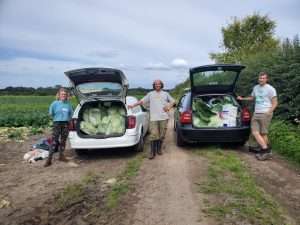 Traditionally gleaning is one way of saving food that has been left unharvested and putting it to good use. In ancient times, gleaners went around fields after harvest to gather produce that had been left behind. Now, in the 21st century, the practice is much the same though it’s usually done by volunteers and the food collected is often sent to charities and food projects. This role will look at how we can adapt this concept for our area to save as much food as possible. This will involve working with local producers and running gleaning events out on farm, but it will also involve connecting-up local community projects, allotments and orchards to create new distribution routes. Jay will also linking local businesses to Eggcup and the wider food support network to ensure that food is redistributed locally and waste is minimised across the supply chains in the district.

We’re really excited to be involved in this ambitious project. Whilst we don’t see gleaning and surplus food redistribution as the long term solution to a fundamentally flawed system, we do see the value of taking action now to drastically reduce the amount of delicious and nutritious food currently going to waste.

(Thanks to Martin Paley and Food Futures for the photos).