Home/Blog/Christmas at Eggcup
Previous Next

Supermarkets have lots of surplus food at Christmas. They want to have stock of the standard items for everyone, whenever they come in, and some surprising things that they might only stock for the holiday, when customer might want to try something new. When everything closes around 4:00 p.m. on Christmas Eve, they have lots left over, and two or three days before they open again. Often, the use-by dates are fairly soon, so they can’t hold it until after the holiday.

On Christmas Eve 2019, Eggcup collected a lot of food, but some of the usual outlets were closed. In 2020, David and Phil made arrangements for pick-ups from 17 local supermarkets. They also opened the Lancaster hub and the Morecambe outlet on Christmas Eve, so members could book times to come in and see what was available.

It was a jolly occasion. Volunteer drivers brought in truckloads from as far away as Kirkby Lonsdale. Lots of volunteers came in to help distribute it,  wearing Christmas hats and seasonal jumpers (it was cold). People saw the just-finished Morecambe shop for the first time. The food was weighed first. logged in,, and checked for use-by date, chilled or ambient; high-value items were flagged for immediate distribution. There were big geese, lots of packs of bacon, pinwheel things people couldn’t figure out, and of course lots of sprouts and satsumas. Volunteers would grab especially large and luxurious cakes as they came in and rush them to the counter, to make sure they all got to a good home. Members were asking for extra carrier bags.

Huge amount of food were given out. And the rest? Some items could be frozen. Others were set aside for making into soup. And when the hub opened for members the next Monday (they only closed for Christmas) there were still a lot of satsumas for members coming for their regular pick-up

Christmas at the Lancaster hub 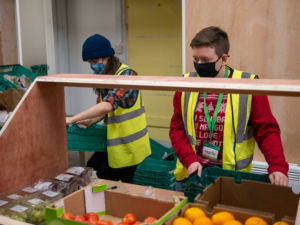 The effort of staff and volunteers saved tons of food from going to waste.