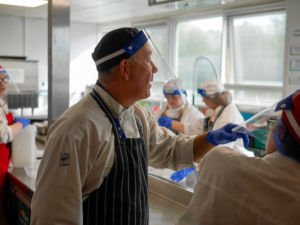 The meals that Eggcup delivers to vulnerable people around the area are made by the Lancaster and Morecambe College Catering Department, with puddings from Chef’s Catering Northwest. When David, our charity manager, first proposed the idea to Adrian (above) and Lindsey (below) at the College, they were eager to participate. The students had been sent home, the staff were doing distance teaching, the restaurant was shut, and the vast kitchens weren’t being used. 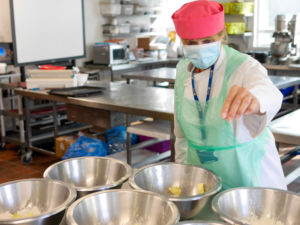 Adrian and Lindsey got together a team with their colleague Steve, some student volunteers, and College colleagues from Personnel, Health and Safety, Occupational Health, and Marketing. They had money from the City Council to buy ingredients, and they also got some from producers, such as Dewlay cheese, who found themselves overstocked. 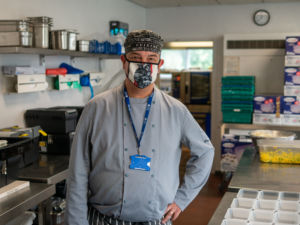 Adrian says they enjoyed the chance to do something for the community, when they couldn’t do their work. And it was a challenge, shifting from the cooking they did for the college restaurant, to more of an assembly line, making large numbers of dishes. And they had to think about what could be frozen and reheated. All summer they made as many as 1500 meals a week, prepping on Tuesday, cooking on Wednesday, and packaging them up for delivery on Thursday. Then Eggcup would pick them up, freeze them, and deliver them to people’s homes 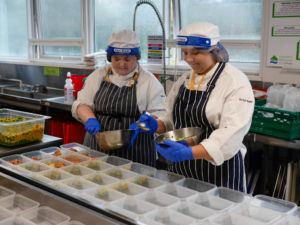 Now the students are back, so we wanted to see them at work. The first floor of the Business and Conference Centre has their restaurant, prep rooms, and kitchen.  It was a Thursday, and four students were packaging the meals in plastic trays ready for delivery. Sallie wants to open a tearoom (she is making a Battenberg cake this weekend).Georgia wants to work in a bakery. Yasmin has worked in a takeaway and plans to be a cook. Julie wants to work in a restaurant. Adrian supervised, choosing the sides (corn and broccoli with the corned beef, rice with the chilli), having the students measure the portions and record the numbers, reminding them to check the temperatures when they took the boxed meals off for the Eggcup van. It was a busy place, with students and staff going about their tasks, seeing to the food for the college restaurants as well as for Eggcup delivery. You may run into these people again some day in a restaurant near you (or you might try a Battenberg in Sallie’s teashop). 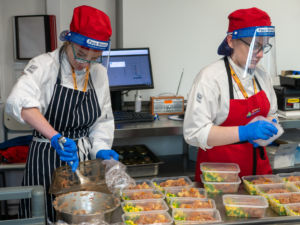 Eggcup is partner on the project with Age Concern, and it is funded by the Morecambe Bay Foundation and Lancaster City Council.