One year (and a bit more) at the Lancaster Hub 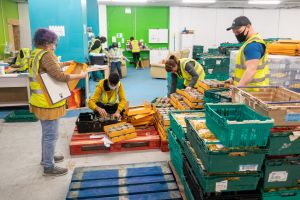 When Eggcup started out, more than two years ago, we knew we needed a modest-sized warehouse to store the food and keep industrial-sized fridge and freezers. But we didn’t plan on having a place to meet members – that would all be done at weekly food club meetings at community centres, church halls, and pub rooms, hired by those groups for the evening. David and the staff members set up the warehouse on the Lansil Industrial Estate (he literally built his own office) and though it was a tight fit, it worked.

Then came the pandemic. Eggcup was serving many more people, in several different programmes. The warehouse was very crowded with food, so it was hard to operate in a safe manner. And instead of delivering to clubs, dozens of volunteers delivered parcels directly to members. That couldn’t go on forever; we needed a safe, roomy and well-ventilated place they could come and choose their food.

The solution to both problems was the former Coop grocery story on Chapel Street, next to the bus station. The Chair of Eggcup’s trustees, Deborah Finn, who was keeping an eye on all likely vacant buildings in our area, scouted it out, and arranged to meet with the owners, City Block. They had been intending to tear it down and build on it, but their plans and their planning permission were delayed due the pandemic. They very generously gave us a license to occupy the building for free until they told us they needed it for their plans. It would have been much easier for them just to leave it empty until they tore it down.

The space is actually three buildings, and it had been used at various times over more than a hundred years as a warehouse for a removals firm and a supermarket. But it had been empty since the 2015 floods after Storm Desmond filled it with water several feet deep, so you can imagine the state it was in. When Deborah went in with the City Block managers, in August 2020, it was dark and wet, thick with mud, leaking from the roof, with ceiling tiles and wires dangling down. 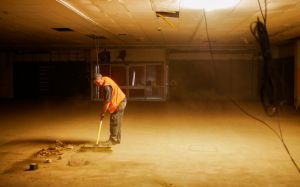 In just a month, many people worked at cleaning it out and fixing it up. Much of the basic work was done by Dave Ferguson, with his colleagues from the Lancaster City Council Housing Department, aided by all members of Eggcup staff and many volunteers. Dave cleaned and cleared out, and a council street sweeper drove through the building. George France and Dave Ferguson fixed the leaks in the roof (for now) and patched the floor and walls. He built a prep room for processing food, built the counters with space for display refrigerators and freezer, put in a kitchen for the volunteers, and a nice final touch, put in rather elegant wooden bike racks. Sometimes the building was crowded with electricians and plumbers, sometimes there was just Dave Feguson, working away. At the end, staff members and volunteers cleaned and painted walls and floors, scrubbed the toilet, and patched the ceiling – the bright colours made a huge difference. You can see some of this work in a slide show here:

Then in just a few days, David, Phil, Jay, and Jeni, with a lot of volunteers, moved all the food to the new site. (The old site, which we still rent, was used by the Olive Branch Food Bank).

One year later, it is hard to imagine how we ever got along without it.

There are also advantages we hadn’t anticipated.

All that huge work preparing the space, done by electricians and plumbers, Dave and his colleagues, staff and volunteers, would have been worth it even if we used it just for the months from September up to Christmas. But we have now been in it fourteen months, as City Block periodically renewed our license, so we have benefitted enormously from the owners’ generosity and everyone’s work. We have used the model of the shop serving members as the basis for an outlet in Morecambe.

The question now is where we go next, when City Block finally develops the land. Our operations are now far too big for our old warehouse. We know whatever we find won’t be the same sort of space – Lancaster city centre doesn’t have any other empty rundown supermarkets with access for lorries to unload and load. What comes next is likely to be a combination of a warehouse space in a less accessible area, with an outlet, like the one in Morecambe, in Lancaster. We are always on the lookout, but if you know of spaces coming up, let us know. One thing a year at the hub has taught us: how to see the possibilities even in an unlikely-looking space.