Recognition for Eggcup from the High Sheriff of Lancashire

Recognition for Eggcup from the High Sheriff of Lancashire

Eggcup is delighted that its work in the Covid-19 crisis has been recognised by a certificate from the High Sheriff of Lancashire.

If you are thinking of six-guns and pointed stars, Catherine Penny is not that kind of sheriff. The role dates back to 1154, and its holders, who are appointed for one year, included John of Gaunt. The role is ceremonial now. (Gardeners may recognise Catherine Penny as founder of Stydd Nursery in Ribchester, with its famous roses).

In a normal year she would have gone around the county visiting and promoting charitable work, especially work with children, which is her own volunteer interest. But she took office in March 2020, so her year has been spent learning Zoom and meeting people at a distance. She says these awards are a way of recognising volunteers that, in other years, she might have met in person.

Other recipients include a local face-shield producer, a podcast maker, a scout troop, the Bowland and Pennine Mountain Rescue, food organisations, and care home workers. We are honoured our volunteers have are in this company. 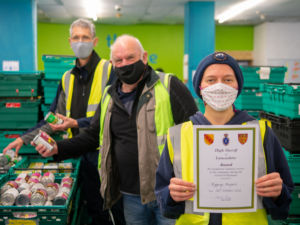